The Zen of Modeling

Posted on August 8, 2010 by statswithcats

What’s the first thing you think of when you hear the word model? The plastic model airplanes you used to build? A fashion model? The model of the car you drive? The person who is your role model? But what do any of those things have to do with data analysis? Read on; you’re about to find that statistical analyses begin and end with models.

By Any Other Name

What do a Ford Focus, a plastic airplane, and Tyra Banks have in common? They are all called models. They are all representations of something, usually an ideal or a standard. 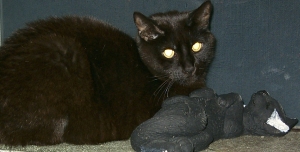 This is supposed to be a model of ME!

Models can be true representations, approximate (or at least as good as practicable), or simplified, even cartoonish compared to what they represent. They can be about the same size, bigger, or most typically, smaller, whatever makes them easiest to handle. They usually represent physical objects but can also represent a variety of phenomena, including conditions such as weather patterns, behaviors such as customer satisfaction, and processes such as widget manufacturing. The models themselves do not have to be physical objects either. They can be written, drawn, or consist of mathematical equations or computer programming. In fact, using equations and computer code can be much more flexible and less expensive than building a physical model.

Customarily, models are used either to:

Whether you know it or not, you deal with models every day. Your weather forecast comes from a meteorological model, maybe several. Mannequins are used to display how fashions may look on you. Blueprints are drawn models of objects or structures to be built. Examples are plentiful.

Humans, in particular, are modeled all the time because of our complexity. Children play with dolls as models of playmates. Mannequins are simplified models of fashion models, who in turn, are models of people who might wear a fashion designer’s wares. Posing models provide reference points for artists. Crash test dummies reveal how the human body might react in an automobile accident. Medical researchers use laboratory animals in place of humans for basic research. Medical schools use donated cadavers as models, very good ones as it turns out, of the human anatomy. So, there should be nothing unfamiliar or intimidating about models.

Whether it is a physical scale-model of a hydroelectric dam or a mathematical model of weather patterns, a model is nothing more than a tool used to stimulate the imagination by simulating an object or phenomenon. The model airplane takes its young pilot looping through the blue skies of a summer day. Globes teach geography and orreries teach planetary motion. The mannequin shows the bride-to-be how beautiful she’ll look in the gown at her wedding. The concept car unveiled today gives consumers an idea of what they may be driving in a few years. The National Hurricane Center uses over a dozen mathematical models to forecast the intensities and paths of tropical storms and to help understand the complex dynamics of hurricanes.

A Medley of Numbers

Mathematical models can be either theoretical (i.e., derived mathematically from scientific principles) or empirical
(i.e., based on experimental observations). For example, celestial movements and radioactive decay are phenomena that can be evaluated using theory-based models. To calibrate a theoretical model, the form of the model (i.e., the equation) is fixed and the inputs are adjusted so that the calculated results adequately represent actual observations.

Empirical models differ from theoretical models in that the model is not necessarily fixed for all instances of its use. Rather, empirical models are developed for specific situations from measured data. Model formulation and calibration are simultaneous. However, the selection of the form of the equation and the inputs used in an empirical model are usually based on related theories. Models developed using statistical techniques are examples of empirical models.

OK, that’s way more than you need to know. Let me simplify. Mathematical models are based on theories or observations or both. They can produce a single (exact) answer for a set of inputs by assuming there is no variability or a range of (inexact) answers by incorporating the variability into the model.

For example, distribution models are equations that produce exact solutions for the equation curve. The model describes what your data frequency would look like if your sampling were a perfect representation of the population. So if your data follow a particular distribution model, you can use the model instead of your data to estimate the probability of a data value occurring. This is the basis of parametric statistics; you evaluate your data as if they came from a population described by the model. (In contrast, nonparametric statistics use your data instead of an exact model to estimate the probability of a data value occurring.) It’s like building a sand castle. A distribution model is like a bucket you can fill with sand (data) to create the castle (the result) with great efficiency. Without the model serving as a substitute, it takes more effort (data) to completely shape the castle.

Statistical analyses involving descriptive statistics and testing rely on exact mathematical models like the Normal distribution to represent data frequencies and error rates. Just as importantly, though, statistical techniques are used to build models from data. Such statistical models include an error term to incorporate the effects of variation, and thus, are inexact because they produce a solution that is a range of possible values. Statistical analyses involving detecting differences, prediction, or exploration involve using statistics to estimate the mathematical coefficients, the parameters, of a model.

So, models and statistics are closely intertwined. Statistical analyses begin and end with models. Models serve as both inputs and outputs of statistical analyses. You can’t do without them, so you might as well understand what they are.

Charlie Kufs has been crunching numbers for over thirty years. He retired in 2019 and is currently working on Stats with Kittens, the prequel to Stats with Cats.
View all posts by statswithcats →
This entry was posted in Uncategorized and tagged cats, drivers, jargon, math, model, modeling, Normal distribution, population, probability, statistical analysis, statistics, stats with cats, t distribution, uncertainty, workload. Bookmark the permalink.

13 Responses to The Zen of Modeling