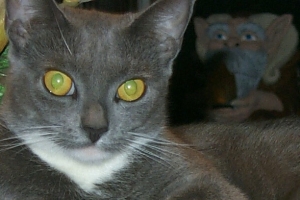 If you’ve ever taken any applied statistics courses in college, you may have been exposed to the mystique of 30 samples. Too many times I’ve heard statistician do-it-yourselfers tell me that “you need 30 samples for statistical significance.” Maybe that’s what they were taught; maybe that’s how they remember what they were taught. In either case, the statement merits more than a little clarification, starting with the 30-samples part. Suffice it to say that if there were any way to answer the how-many-samples-do-I-need question that simply, you would find it in every textbook on statistics, not to mention TV quiz shows and fortune cookies. Still, if you do an Internet search for “30 samples” you’ll get millions of hits. 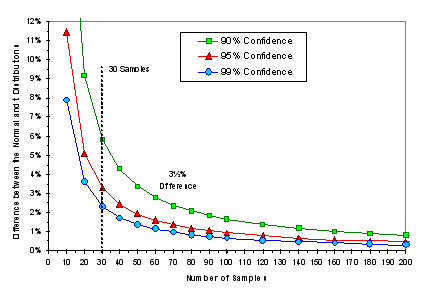 The second argument is based on the Law of Large Numbers, which in essence says that the more samples you use the closer your estimates will be to the true population values. This sounds a bit like what Gosset said in 1908, and in fact, the Law of Large numbers was 200 years old by that time.

This figure shows how differences between means estimated from different numbers of samples compare to the population mean. (These data were generated by creating a normally distributed population of 10,000 values, then drawing at random 100 sets of values for each number of samples from 2 to 100 (i.e., 100 datasets containing 2 samples, 100 datasets containing 3 samples, and so on up to 100 datasets containing 100 samples. Then, the mean of the datasets was calculated for each number of samples. Unlike Gosset, I got to use a computer and some expensive statistical software.) The small inset graph shows the largest and smallest means calculated for datasets of each sample size. The large graph shows the difference between the largest mean and the smallest mean calculated for each sample size. These graphs show that estimates of the mean from a sampled population will become more precise as the sample size increases (i.e., the Law of Large Numbers). The important thing to note is that the precision of the estimated means increases very rapidly up to about ten samples then continues to increase, albeit at a decreasing rate. Even with more than 70 or 80 samples, the spread of the estimates continues to decrease. So again, there’s nothing extraordinary about using 30 samples.

So while Gosset may have inadvertently started the 30-samples tale, you have to give him a lot of credit for doing all those calculations with pencil and paper. To William Gosset, I raise a pint of Guinness.

Now we still have to deal with that how-many-samples-do-I-need question. As it turns out, the number of samples you’ll need for a statistical analysis really all comes down to resolution. Needless to say, that’s a very unsatisfying answer compared to … 30 samples.

Charlie Kufs has been crunching numbers for over thirty years. He retired in 2019 and is currently working on Stats with Kittens, the prequel to Stats with Cats.
View all posts by statswithcats →
This entry was posted in Uncategorized and tagged cats, correlation coefficient, Gosset, jargon, law of large numbers, Normal distribution, number of samples, population, rule of thumb, sample size, samples, statistical analysis, statistics, statistics 101, stats with cats, t distribution. Bookmark the permalink.