The Foundation of Professional Graphs

Some people are content with visualizing their data sets using pie charts and bar charts. If you really want to analyze data, though, you need to know how to pick the best graph for the job. Here’s the first step in doing just that.

Like cats, you can never have too many graphs.

This blog concerns the first of the three elements — the foundation of a graph.

A sample in statistics is usually thought of as a portion of a population. In graphing, samples are the individual pieces of a statistical sample-of-a-population. These individual pieces might be referred to as observations, subjects, patients, students, objects, items, measurements, entities, records, cases, or individuals. There are many terms for samples because there are many different types of populations. Medical studies have samples who are patients but may also collect blood (or other types of) samples. Education studies have samples that are students, classes, schools, and so on. Environmental studies may collect samples of air, soil or rock, plants or animals, or water. Samples in sports are usually players, athletes, or teams. Industrial samples are usually items or products. Get the idea? Samples are the points that will appear on your graph.

So in a sentence, variables determine where on a graph the samples are to be placed.

The first thing you’ll need to do to create a professional graph is to select the foundation — the underlying type of graph. This foundation is based on the scales on which the variables are measured.

Cats understand what scales are for. 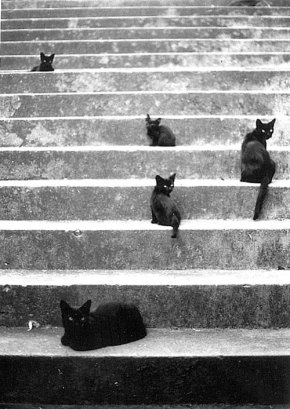 Time scales are especially important in graphing because they are the basis for so many statistical relationships. Time is always measured on at least an ordinal scale, but the intervals between time periods are not always equal. Geologic time, for example, has more to do with rock layers and fossils than with age even though the unit of the time scale is years. Real time can be measured in years, months, weeks, days, hours, minutes, and seconds. As long as you don’t mix the units, the intervals will be equal.

Plotting ordinal scales can be problematical when the intervals the scales represent are not equal. Worse, there are cases in which the sizes of the intervals are unknown. Consider these examples:

Ordinal scales are often used for describing obscure concepts like satisfied-unsatisfied and good-bad which are used often on opinion surveys. No one can say whether differences between the scale levels are equal or not. Still, it may appear that way when graphed leading to misleading interpretations.

Changing the scale of a variable to be graphed is feasible in most cases and useful in some, but not always a good idea. That’s because by changing scales you are changing the information content of the variable, and hence, it’s meaning.

Converting a continuous scale to an ordinal scale leaves information by the wayside. You reduce precision, and sometimes, accuracy. Still, there are reasons for doing so, most typically, to reduce extraneous measurement variability.

Catzilla awaits an opponent in his weight class.

Katie Taylor’s lightweight weight class is a good example. If Katie (or anyone else for that matter) were to weigh themselves repeatedly over the course of a day, they would find that their weight would fluctuate by a few pounds just due to normal bodily processes, like sweating. An intense workout can reduce weight by several pounds while rehydrating by drinking fluids will add weight. Consequently, using an ordinal scale weight class can reduce the apparent variability. Katie’s weight may change but not her weight class. Using an ordinal scale can also facilitate comparisons. It is much easier to find Katie a lightweight opponent than it would be to find her a 132-pound opponent.

Histograms are another example of how converting from a continuous scale to an ordinal scale can facilitate comparisons, in this case, between a distribution of data measurements and a theoretical mathematical model. However, the interval you choose for the ordinal scale can greatly affect the appearance of the graph. There are better ways to compare sample distributions to theoretical models but they are more complicated than histograms.

Converting an ordinal scale to a continuous scale requires the addition of information. This can be a difficult but useful process because graphing is simpler if your variables are measured on continuous scales. Three commonly used conversion processes are:

There are many other ways to convert ordinal scales to continuous scales, for instance, by multiplying or dividing two ordinal scale variables. But, only make the conversion if it makes theoretical sense for your analysis.

There are more kinds of graphs than most people, even data analysts, would ever need to know about, but they are really all just variations of a few basic graphs.

Start with these basic types. As you consider the framework of the plots (i.e., axes, focus, objective, data dimensions, and priority) you’ll see how the basic graph types can easily take on many different appearances.

Scales and Types of Graphs

In graphing, selecting an appropriate type of graph depends on whether the variables you want to plot are measured on ordinal or continuous scales or both. Nominal scales don’t enter into selecting a type of graph even though they are used often in graphing, usually to compare groups of data.

Here is an overview of the relationships between variable scales and the types of graphs they can be used with.

Always be sure you have a good foundation.

Once you understand the scales of your variables, you can choose the basic kind of graph that will work best with your data. But remember, there are other types of graphs, subspecies of the basic graphs, variations and extensions of these graphs, combinations of graphs, and graphs that go by a variety of different names. For now, focus on the basic types of graphs. Make sure you start with a good foundation.

Charlie Kufs has been crunching numbers for over thirty years. He retired in 2019 and is currently working on Stats with Kittens, the prequel to Stats with Cats.
View all posts by statswithcats →
This entry was posted in Uncategorized and tagged bar chart, cats, chart, graph, line chart, measurement scales, ordinal, plot, samples, Scales, scatter plot, standardization, stats with cats, variables. Bookmark the permalink.

10 Responses to The Foundation of Professional Graphs